Only In the Land of the Lamanites

The Mormons believe that people of dark skin is a curse. However by joining the church their skin will turn white.

According to the Book of Mormon, the church believed they had a divine obligation to convert the aborigines to Mormonism according to church doctrine, and in so doing the so-called "loathsome" Indians would become a "white and delightsome people" and would be forgiven of the sins of their forefathers.  (Book of Mormon 2 Nephi 5:21-23) According to church doctrine, the nature of the dark skin was a curse, the cause was the Lord, the reason was because the Lamanites "had hardened their hearts against him, (God)" and the purpose was to make them "loathsome" unto God's people who had white skins. Ezra Booth wrote the following in the early 1800's: "In addition to this, and to co-operate with it, it has been made known by revelation, that it will be pleasing to the Lord, should they form a matrimonial alliance with the Natives; and by this means the Elders, who comply with the thing so pleasing to the Lord, and for which the Lord has promised to bless those who do it abundantly, gain a residence in the Indian territory, independent of the agent. (meaning government Indian agents)" Note: November 8, 2007 LDS Church leaders make a change in the Book of Mormon.

This photograph I found in the state archives in Utah that appeared in the Deseret News in 1904, and had the following caption: 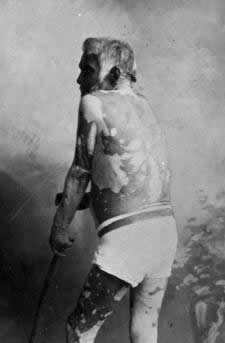 "Pahvant with skin disease, exhibited in sideshows by Mormons who believed his skin was turning white because he had joined the church. He died near Kanosh.

Aged Utah Indian who is being taken to the World's Fair. The aged Pauvant Indian of a southern Utah tribe, now nearly extinct, has been brought to Salt Lake to be taken to the World's Fair at St. Louis to be exhibited as a wonder. His name is Pauschaunt, and readers of the Deseret News know something of the discussion that has arisen over ""the reason for his having turned white"". He declares that it is in fulfillment of a promise made to him long ago. That he should ""become white through forsaking the ways of war and pursuing the paths of peace and religion". Physicians have asserted that the change is simply the result of disease.

But whether that conclusion is correct or the views that some others entertain are right, he is nevertheless the object of much curiosity. The change is said to have commenced 35 years ago and gradually extended until a great part of his body has become as white as a Caucasian's. Pauschaunt has been in Salt Lake since Friday in company with Dr. C.I.Foote of Los Angeles, and Mr. James George of Kanosh, the latter acting as interpreter, as the aged aborigine does not speak a word of English. He is said to be 103 years old and is exceedingly nimble and active for an old man. He appears to be delighted at the prospects of his trip to St. Louis.

According to the Mayo Clinic:

"Vitiligo (vit-ih-LI-go) is a condition in which your skin loses melanin, the pigment that determines the color of your skin, hair and eyes. Vitiligo occurs when the cells that produce melanin die or no longer form melanin, causing slowly enlarging white patches of irregular shapes to appear on your skin.


Vitiligo affects all races, but may be more noticeable and disfiguring in people with darker skin. Vitiligo usually starts as small areas of pigment loss that spread with time. These changes in your skin can result in stress and worries about your appearance.

There is no cure for vitiligo. The goal of treatment is to stop or slow the progression of pigment loss and, if you desire, attempt to return some color to your skin."

This is the same skin condition that Michael Jackson had.

The following is a quote of LDS president Spencer W. Kimball:

"I saw a striking contrast in the progress of the Indian people today as against that of only fifteen years ago. Truly the scales of darkness are falling from their eyes, and they are fast becoming a white and delightsome people....

The day of the Lamanites is nigh. For years they have been growing delightsome, and they are now becoming white and delightsome, as they were promised. In this picture of the twenty Lamanite missionaries, fifteen of the twenty were as light as Anglos;...The children in the home placement program in Utah are often lighter than their brothers and sisters in the hogans on the reservation.

At one meeting a father and mother and their sixteen-year-old daughter were present, the little member girl...was several shades lighter than her parents...There was the doctor in a Utah city who for two years had had an Indian boy in his home who stated that he was some shades lighter than the younger brother just coming into the program from the reservation. These young members of the Church are changing to whiteness and to delightsomeness. One white elder jokingly said that he and his companion were donating blood regularly to the hospital in the hope that the process might be accelerated.